MURDER AT THE EMPIRE (Ever After Mysteries Book 4) by Cathe Swanson, Reviewed by Paula Shreckhise 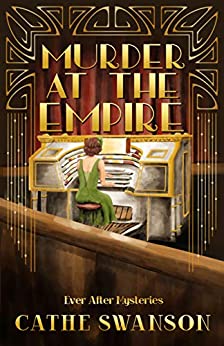 With a solid faith underpinning, the author gives us a cast of some likable and some shifty characters. Gayle has found a position as one of the first lady organists for silent movies at the grand Empire Theater in Chicago. This colorful tale is set amid the backdrop of prohibition and is a mystery of two, maybe three murders and a missing manager.

John, the owner of the theater, befriends Gayle and a romance blooms. The mystery is interesting and takes us back in time to speakeasies, thefts, and forbidden booze.

I am finding this series to be fresh and an easy way to be thoroughly entertained.
*I received a complimentary copy of this ebook from Celebrate Lit. I was not required to give a favorable review. All opinions are my own.*5 stars and a solid faith thread.

BackCover Blurb:
Gayle Wells is a killer organist, but does a killer have her in his sights?

They call him the Emperor. John Starek fills his theater with fine artwork and treasures. He’s particularly pleased to have one of the country’s first female organists – and he thinks Gayle Wells is the bee’s knees.

Despite pressure from her social crusader mother, Gayle isn’t interested in changing the world. She just wants a car of her own – and a career playing the organ at the Empire movie palace would be especially ducky.

Then the Empire’s treasures start disappearing and employees start dying. Are a few pieces of art really enough motive for the string of murders? Will Gayle be next?

Murder at the Empire brings The Nightingale into an elegant movie palace in the roaring 20’s – but the real excitement is all off-screen.

Celebrate Lit Publishing, October, 2021
Buy Murder at the Empire at Amazon in digital ebook or paperback
Posted by Debra E. Marvin at October 24, 2021